Last night about 9:30 I was almost asleep; and my phone rang. It was my Step Mom, Deb. 1, she hardly ever calls.2, when she calls it’s generally not good news. My Dad just cannot relay serious / sad news.

My Grandpa Gib had this nagging cough and had been to the doctor, had some antibiotics and a neutralizer. He was at my Mom’s restaurant last night and had dinner, about 8:30 called my Uncle Mike to say he couldn’t stop coughing, and Mike suggested maybe they go to the hospital so he headed over. We had been asking Grandpa to lock the door; well he did that, so Mike told Grandpa he had to go back and get a key (he lives a few miles away and had a different vehicle!) so he called the ambulance and went to get a key. The cop met him there and they found the chain was pulled. They had to kick in the door and get to grandpa and he was unconscious. He was rushed to the hospital; I got there shortly after and saw him off to the ICU from the ER. It was very grim. He had an external defibrillator and still hadn’t regained consciousness. I stuck around til sometime in the wee hours of the morning. I tried to get a few hours of sleep then got up went in to work to basically just talk with the boss and leave.

As I got  to the hospital; they checked his heart and one valve was working okay, the other not very well at all. They had cooled him down a lot last night and first EEG showed no brain activity; but they had to warm him back up to test again. The charge nurse came in once to tell us his blood pressure bottomed out one and we weren’t sure he’d make it through; he did through that bought. Later on, they did a few more tests to further prove brain death; he failed them all, there was one more that needed to be done to be medically/legally declared brain dead but as a family it was decided to withdraw support and let nature take his course. We knew his kidneys and liver were failing, his heart was really struggling.

Grandpa Gib passed very peacefully surrounded by all of the family (except my cousin Ashley who is in Florida on vacation, but she would have been here if she could have been).  I posted on Facebook that I’m certain Heaven got a lot louder and West Liberty, a lot quieter. Grandpa was a very proud Bohemian! You heard him before you saw him. He is very well-known and loved around town.

This picture is SO very Grandpa. He loved sitting in the garage at the farm watching people drive by (even though there was very little traffic) and having a beer or three. This picture was last Summer, we were celebrating Grandpa’s 88th birthday, and Aunt JoAnne’s 80th! 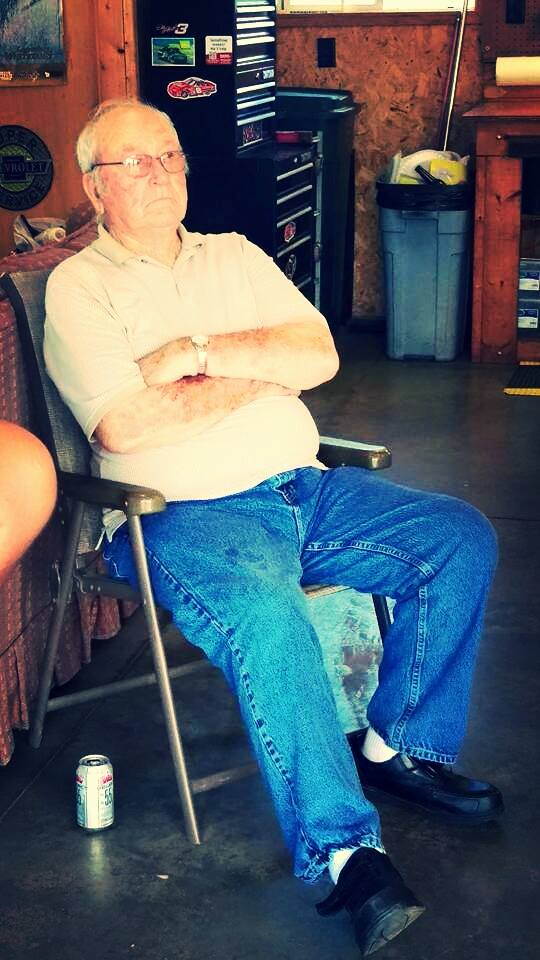