A forewarning; this is going to be a bit long.

I had my first know seizure at the end of November 2002, the crunch before finals in a few weeks. I don’t remember much about it, but I woke up on the love seat below my lofted bed in my on-campus college apartment. One of my roomies said I got sick to my stomach. I remember going to sleep in my bed. I apparently started seizing sometime after that. My face was a mess bruises, bite marks on the inside of my cheek. I went to the doctor, my family doctor was on leave at the time so the doctor who was filling in, was convinced I was drunk and fell out of my bed. I knew I was completely sober. I honestly blamed it on Taco John’s.   Nothing came of it.

Fast forward to May 2003. There was an unfortunate accident and one of my good friends, Ryan was killed in it. It shocked our group of friends, all students. He had stayed with us often vs going home about 15 miles away. He was awesome. None of us slept much; the night of his funeral, May 8th, I don’t remember much other than once again, needing to sleep because I had a presentation  / speech to give for a final. I once again, woke up with a weird feeling, my face was scratched up, my mouth felt like it was bit up again. I crawled down from my bed; noticing my glasses were a mess. I found my old glasses, and looked in the mirror. Yup, it happened again. I had to go to class, everyone looked at me funny. I gave my speech and went to the doctor in my hometown.

My regular doctor was in and she was pretty sure I had a grand mal (tonic clonic) seizure. She believed the episode in November was also a seizure. I was 20. I was referred to the University of Iowa Hospitals and Clinic’s. I saw Dr. Coleman Martin. I had many tests, including an EEG. On that day, May 14, 2003 I was diagnosed with Epilepsy.  Below are pictures from the seizure. My face is all sorts of scratched from the glasses that slid down my face and ended up in my mouth. If you ever wondered how strong your teeth/jaw is; my glasses are about 1/2 inch thick; and I left bite marks on them; noticeable, deep marks. 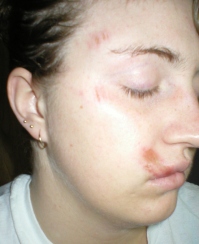 I was diagnosed with Epilepsy. I lost my license. In Iowa you must go 6 months without having a seizure in order to get your driving privileges back. You have to see the Neurologist again, have them fill out some extensive paperwork for the DOT; then take it in, and get your license for the time the DOT allows before having to do the paperwork again.

I was put on a new medicine; Topamax. It wasn’t available in a generic at the time, and for the time being it did its trick. There’s a tricky thing about Anti-Epileptic meds that you need to step up to the full dose. I do not remember exactly what my dose was but I started out with 25 mg a day, then twice a day, once in the morning once in the night. I think I ended up 500 mg, but I could be wrong.

My life was crushed. I had to quit my job (I was working at Maid Rite in West Liberty) a 20 mile drive. I remember the boss was pissed at me, she didn’t react the best. I recall my Mom being on the phone with her and explaining I called her first before I even called my Dad. After a while, she realized she made a mistake and I obviously couldn’t change this.

I was told my seizures were mostly caused by stress and lack of sleep; I was in college; both happened near finals time.  I luckily ended up living on campus again and moving down the hall to the infamous 108. I met the best friends a girl could have, and they were all very accommodating in driving me around and getting me to Hy-Vee to get my medicine and Wal-Mart for whatever I might need.

It was quite the shock, I decided to go at it headfirst. I found books I could read about it and learn. I made some changes that  might seem big or even small to you, but now it just comes natural for me.

I did well on the meds, and it seemed to be the trick.

I graduated college, and was soon to be going off my Dad’s health insurance. Between my new doctor; Dr. Mark Granner (who I believe is one of the best doctors around!)  we decided to give it a shot and step me down and eventually off the meds. I made it 8 months.

April 2006 I was working at my parents bar and grill; my  best friend Shawn was there, and I decided to have a seizure. I woke up in the bathroom puking; and the volunteer EMT crew wouldn’t take no for an answer in taking me to the hospital via ambulance.  I didn’t see my neurologist, but the ER doctor decided to put me back on the meds. Once again the step up to the full dose.

I was sitting in a bar stool with a back and fell off, and managed to break my eye socket. It looked pretty gnarly for almost a month.

I was on COBRA health insurance because trying to get insured when you have a pre-existing condition sucks. I was paying $498/month for it, and nearly $150 for my medicine.

In June 2007 I went to a late movie, alone in Iowa City. I remember getting my ticket, going in, grabbing a Pepsi and finding my seat. I woke up about 45 minutes into the movie. I knew something was wrong. I remember walking out and the cop on duty said “Are you alright hun?” I told him yes. I remember thinking why does he care about me? Did people see me and not do anything about it? Or was he just wondering why the heck someone is leaving halfway through a movie?  I went out to my car, got sick to my stomach, and called my Mom. I told her I think I had another seizure, and went to “Fobian’s Park” also known as Scott Church Park and she met me there to pick me up. I remember getting sick to my stomach again, and home to sleep.  In July around the 4th I woke up two mornings in a row feeling “off / weird”. My dog was perched outside my door – which was closed, and he hung close to me all day.

I, stupidly never reported the seizure at the movie theater or the two I had while I was sleeping.

September 11, 2007. I had bought a new car; I hadn’t even had it a full 24 hours, and was talking to Shawn in Nashville as I pulled out of my driveway to go to Iowa City and get new wiper blades. I don’t remember anything after pulling out of the driveway. I woke up in an ambulance. I drove a few miles (with a few turns!) on autopilot. Shawn said it was horrible to hear it happen and not know what was going on. I ended up on the opposite side to the road,  on top of a fiber optic box.  My ER doc didn’t want to change my meds, even though I insisted, but a month later I had an appointment with  my Neurologist.  The State Trooper who came to the bedside didn’t cite me, but I told him I knew him. He was Ryan’s  (friend who passed away in the accident in 2003) best friend. He put two and two together, and I think that’s what got me out of a ticket. Another 6 months without a seizure and you’ll get your license back.

Had I reported it, I would have saved myself the accident. Luckily no one was hurt or involved. I stayed the night in the hospital for observation.

A month later I met with my Neurologist and my meds were changed.  I began Zonisamide (generic Zonegran) with a little Topamax. As usual you wean off one med, and back up on the other.

I am happy to report that was my last seizure. I’m coming up on 8 1/2 years of seizure freedom. Today I take 500 mg of Zonsamide, and 50 mg of Topamax.

I’ll write more later on how my day-to-day life has changed to a new normal since being diagnosed.